Home » Tales from the field » Happy, Laughing and Wanting to Help 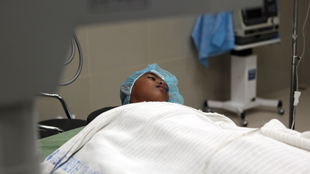 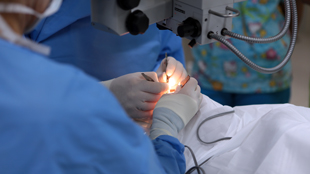 After delays with equipment getting to the Hospital due to mud slides and road closures from the recent Typhoon, surgery for Herbie and the Binwinican children finally got underway yesterday.

Herbie was first up, still with the same smile on his face I remember from last time I saw him 6 months ago. He greeted the team with “Hello Doc …Thank you Doc” as he shook hands with everyone.

Shortly before his surgery, I sat down and spoke with Herbie’s mother and asked what life had been like for Herbie over the last few months since the operation. His mother said that since the surgery Herbie was a completely different person. “He is so happy, laughing and wanting to help ” she kept saying.

She also commented on how Herbie had jumped straight into studying and was currently going through an accelerated education program to catch up on the years he missed due to his blindness.

“He wants to learn and get good job so he can help us” she said. “Perhaps he could study to become an eye surgeon?” I asked. Her eyes lit up and said “Yes Doctor!” She turned to tell Herbie, and he smiled and nodded…

Who knows he may be a future member of the OHI Gift of Sight Team?

Following his post-op examination today, we are pleased to say that the operation went well, and his vision has improved. There is not a dramatic change in his second eye like there was in his first eye 6 months ago. This is most likely due to the length of time that he has been blind and so the brain function has not completely developed, however his vision is certainly better than it was. The first stage of Herbie’s accelerated education exam results are due in October, we are sure the results match the effort he is putting in.