The first 48 hours of the trip has best been described as tiring. Tired eyes and tired faces surrounded the dinner table tonight despite the smiles, the jokes and the excited anticipation to begin work.

The bulk of the team rolled out of bed around 4am on Saturday to get to the airport for the 6:30 meet up prior to jumping aboard the flight to Kathmandu. All the team managed to make it on time with only one planned team member not making the trip (more about that to follow in coming blog entries).

The Malaysian Airlines flights were worry free with fine weather the whole way there. The only turbulence we encountered was at Kuala Lumpur airport when a fellow traveller asked if we were all on a golfing holiday after noticing our matching polo shirts. Those same polo shirts also garnered some awkward attention when we were quizzed by the lead stewardess on whether we were a team of medical people. On confirming that was the case, the response was “That’s fantastic, when we have a heart attack we’ll find you” I think she meant “if”, not “when”… Either way, it was glad to see we were appreciated just by our attendance on the flight. 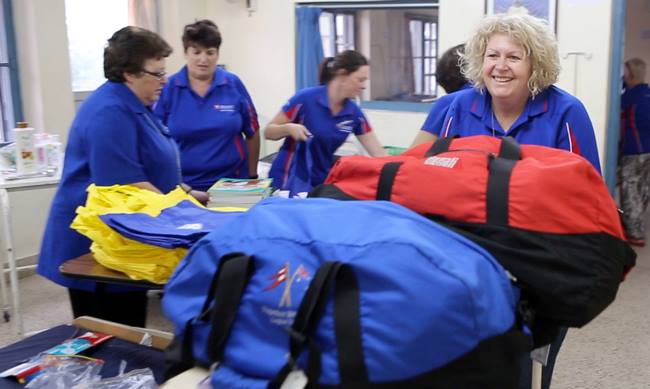 After a midnight arrival into Kathmandu and after x-raying our luggage twice (after getting off the plane), it was straight to bed to ready for the nurse registration on Sunday afternoon and some quick shopping reconnaissance for the following weekend.

Whilst Saturday was challenging our low-sleep functionality, it was Sunday where our first real challenge of the trip was encountered. As the nursing contingent were about to depart, the registration process was called off as a panel member was unwell. This of course will put a lot of pressure on the team to be highly efficient in the first 24 hours of the mission as all nursing staff, bar two, will need to re-attempt registration on Monday afternoon. With the aid of the always effervescent Nepali local staff, the two Anaesthetic Nurses and the SuperSub we may still be able to squeeze in a half-dozen smaller cases. Thankfully, plastic surgery isn’t that hard apparently. One of the surgeons was quoted over Sunday lunch, “Burns surgery is like working in a kebab shop – Shaving slices off the roll and then some suturing – Nothing to it”. The following 10 days could very much test that theory and I may never look at doner kebab the same way again… I’m quite sure the end result for our patients will be far better than the common late Saturday night source of sustenance.